On the 50th anniversary of Adrian Bloom’s Foggy Bottom garden I was lucky enough to have a tour of the iconic Bressingham Gardens from the man himself. The six gardens, spread over 17 acres (6.9 ha), are breathtakingly beautiful and should be a Mecca for any garden lover.

Adrian Bloom explaining the layout of Bressingham Gardens before our tour.

Development of the garden

In 1953, Adrian’s father Alan Bloom, founder of the family nursery Blooms of Bressingham, began creating a garden on land in front of the family home, Bressingham Hall. Having planted traditional borders near the house, Alan found that taller perennials at the back of the border were leaning forward. He didn’t want the maintenance of staking, so he devised the revolutionary concept of island beds, with tall perennials positioned in the centre.

This proved so successful that the garden spread into adjoining meadows and the island beds, some of quite significant size, have since multiplied into a staggering 48 in number. Of course, more island beds mean more border edges, 2.1 miles (3.4 km) to be precise, which I’m told takes one gardener just over two hours to trim. 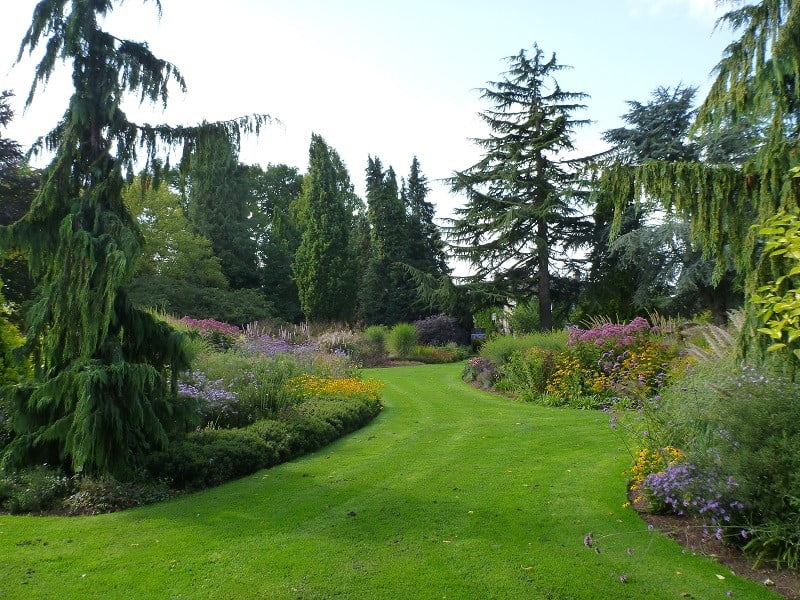 Wide grass paths sweep around the island beds, creating 2.1 miles of edges to be trimmed.

The area where Alan first began planting in 1953 is now the famous six-acre Dell Garden. As you walk from the house the land gently slopes downwards, providing an opportunity to grow plants that prefer some moisture and shade such as hostas, ferns and astilbes. At its centre lies a circular ornamental pond, overlooked by a thatch-roofed summer house. 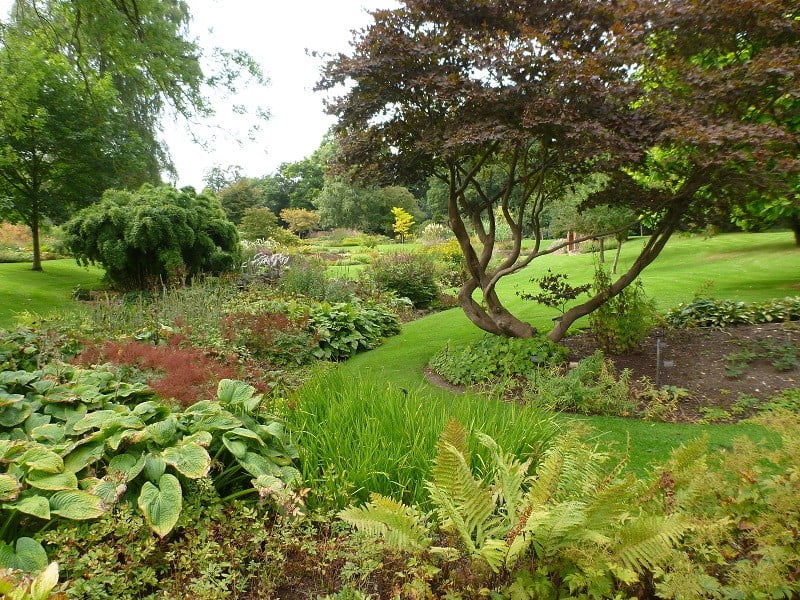 Curving beds of plants that favour damp soil and part shade lead you towards the ornamental pond in the Dell Garden. 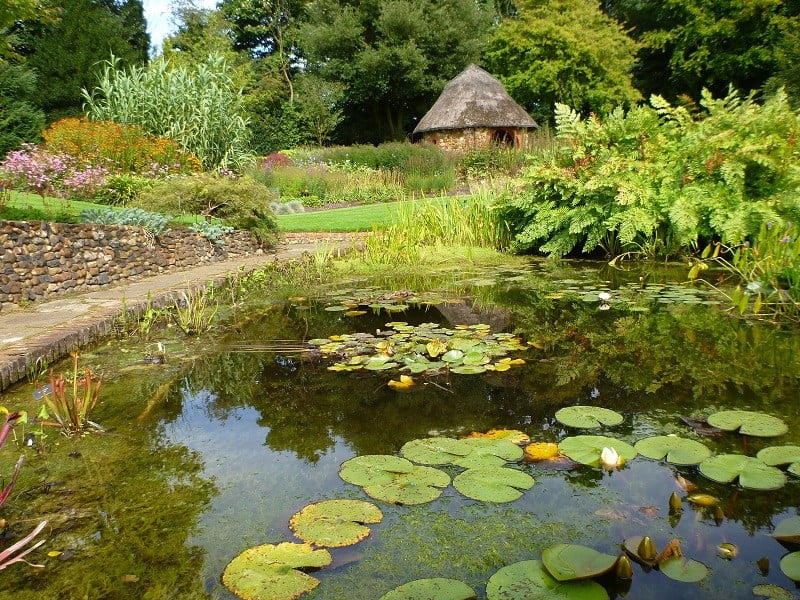 The ornamental pond, overlooked by a rustic summerhouse.

As you meander towards higher ground beyond the pond, the planting noticeably changes to large drifts of sun-loving perennials and grasses. Alan’s son-in-law, Jamie Blake, has lovingly tended the garden for 25 years, preserving it much as Alan created it. Jamie graciously describes himself as ‘curator’. Although the garden is over 60 years old, the style resonates with the new perennial movement spearheaded by Piet Oudolf. 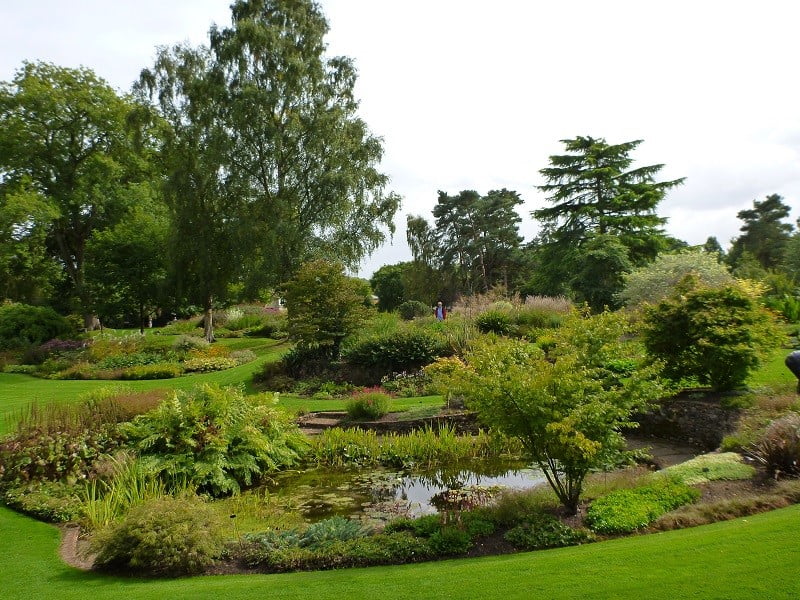 The view over the pond towards the perennial beds. 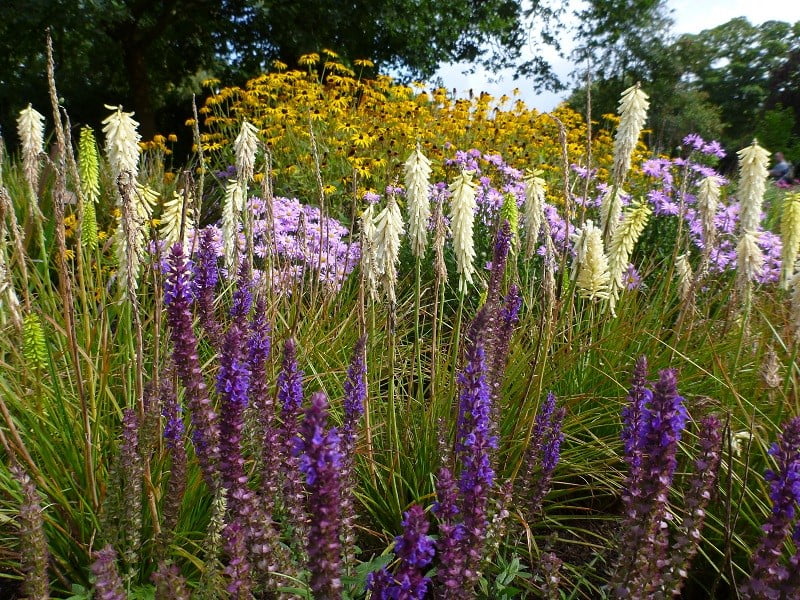 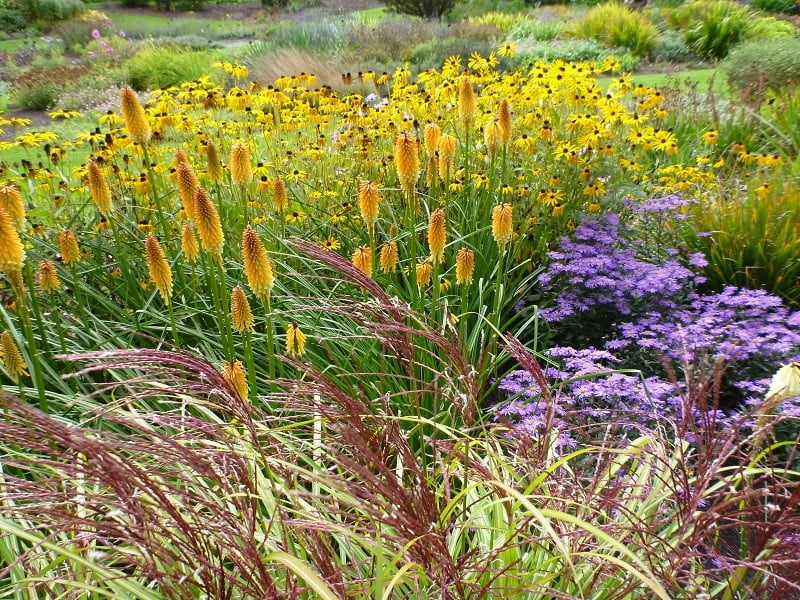 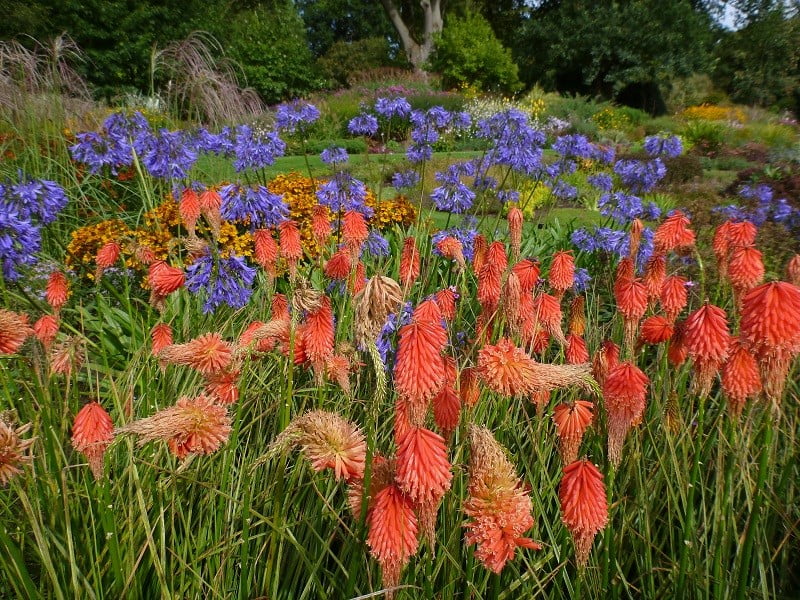 Not far from Bressingham Hall, Adrian Bloom built a home for himself and his wife, Rosemary. In 1967 he began making a garden in the six-acre (2.4 ha) empty meadow surrounding the house, and Foggy Bottom was born. Adrian was particularly keen on conifers and heathers for their year-round interest, and his passion for these much under-used plants, and the skillful way that he incorporates them into a garden, sparked a revival in their use by gardeners across the country.

Fifty years on, and Foggy Bottom is a master-class on how to combine evergreens and perennials for permanent interest. What makes this garden stand out is Adrian’s choice of evergreens. They are not your conventional box and yew, but pines and conifers in a vast range of colours, shapes and sizes. Some change colour through the seasons, others are tall and gangly and are unlikely choice specimens. They all work together to create a stunning backdrop for grasses and perennials. 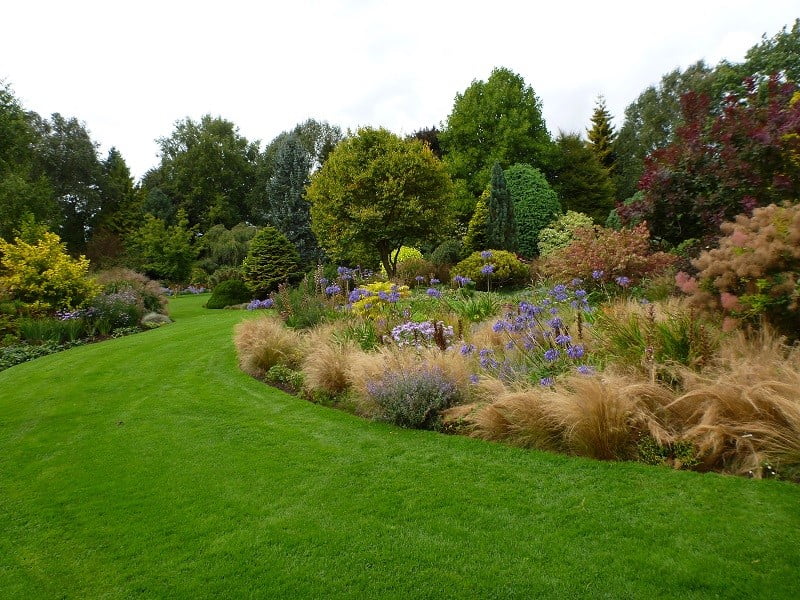 Adrian chooses to keep the grass paths very wide to give a sense of space and allow dramatic vistas. 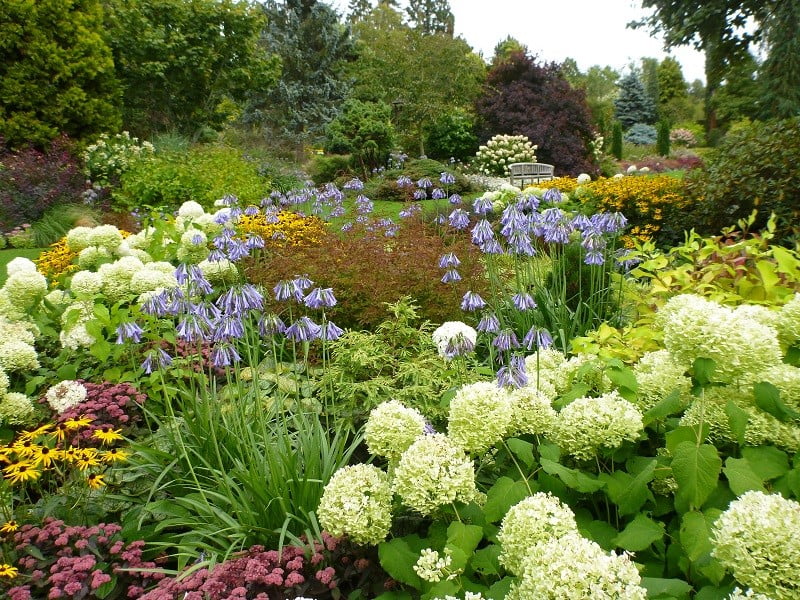 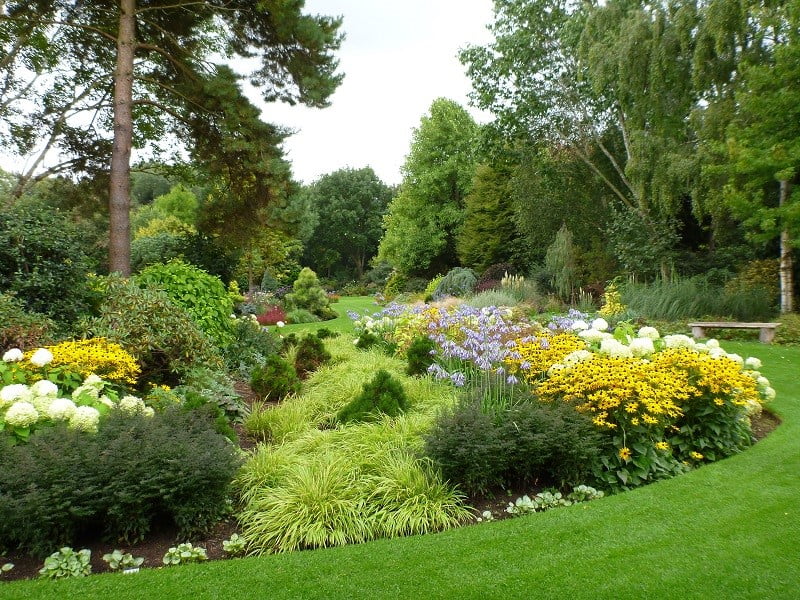 The design always leads the eye to another part of the garden. 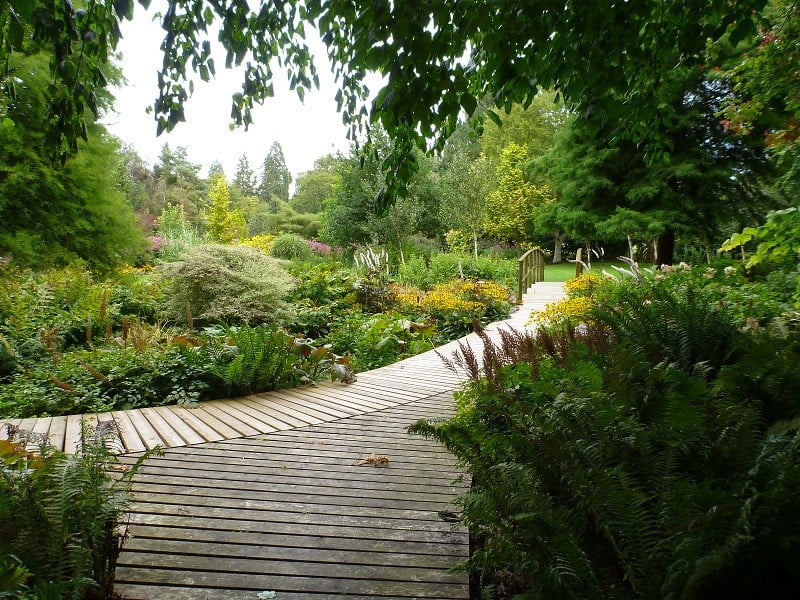 A woodland area of Foggy Bottom with a wooden bridge and boardwalk.

Despite the tremendous gardening history at Bressingham Gardens, time has not stood still. New gardens have been added, each with their own character, but each displaying the unmistakable Bloom talent for magical plant combinations. Visitors now enter through a Winter Garden with shrubs chosen for their fiery tints and tones as the weather turns colder. 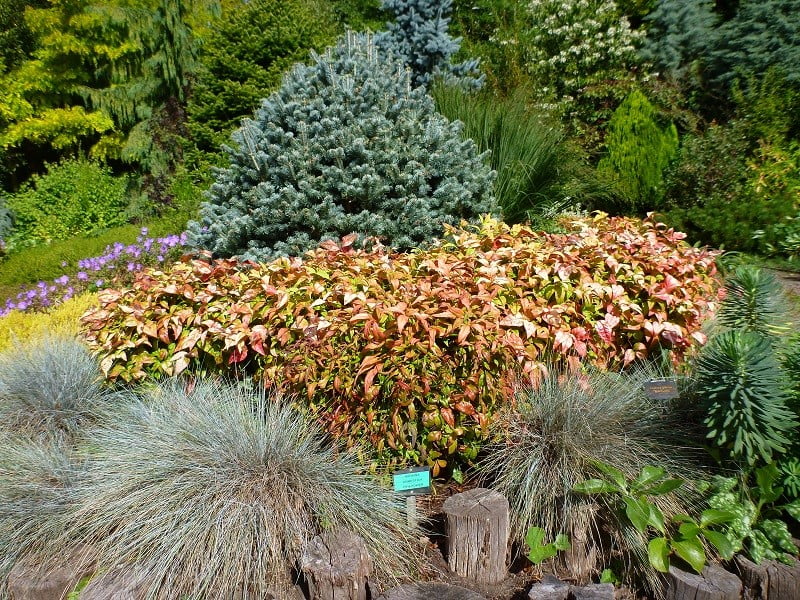 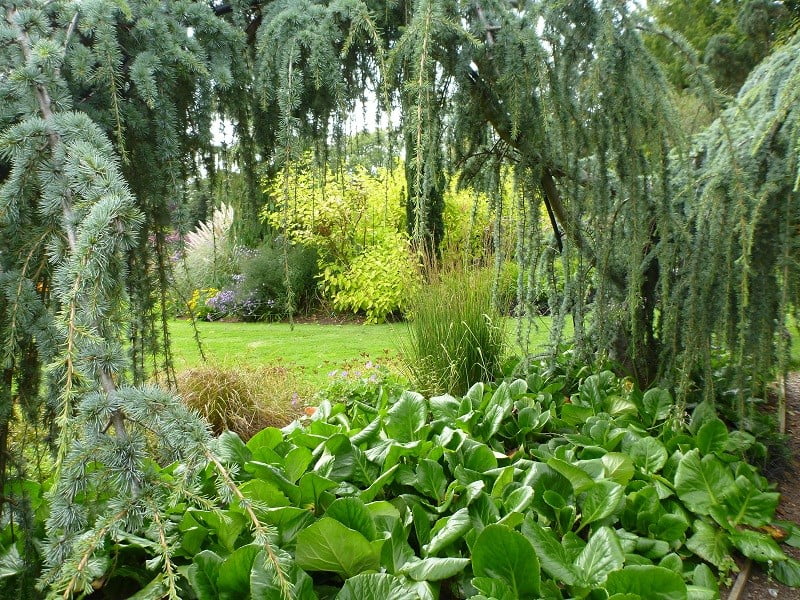 Emerging through a trained arch of weeping cedar, you arrive at the stunning Summer Garden. Adrian’s love of combining shrubs and perennials is very evident here. The sheer scale of the design is remarkable. Although there is some repetition for dramatic effect, I was enthralled by the variety of plants chosen for their foliage.

Who needs flowers when you have foliage this striking? The edging is Hakonechloa macra and Ophiopogon planiscapus Nigrescens.

A view through the wall of shrubs to the perennial bed in the centre.

The vast circular perennial bed with a backdrop of vibrant shrubs.

In addition, a new route has been created from the Dell Garden to Foggy Bottom, taking visitors through the developing Fragrant Garden and Adrian’s Wood, which contains giant Redwood trees and is finding a new identity as a home for plants of North-American origin.

A river runs through it

All through the gardens, borders are dissected by rivers of low growing plants. It’s a brilliant way of providing glimpses across the garden, opening up vistas and giving hints of what lies beyond. 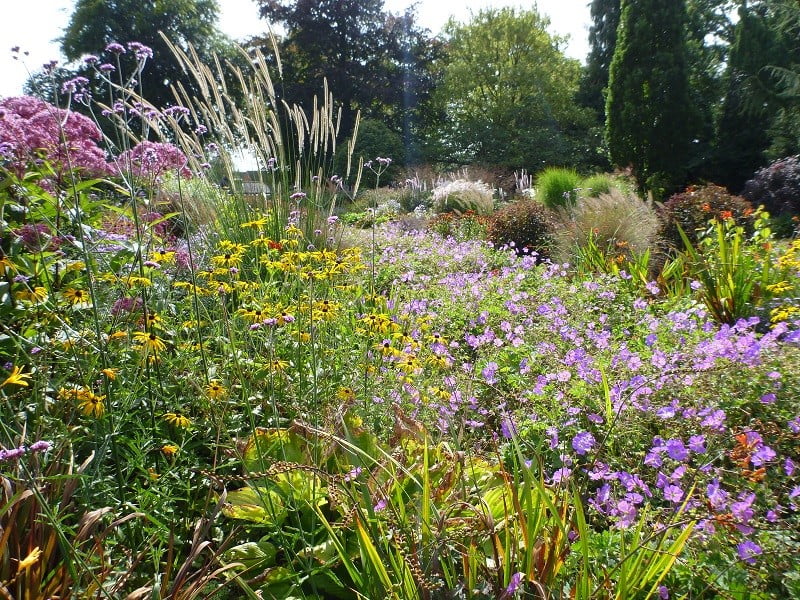 Geranium ‘Rozanne’ creating a river of colour in the middle of the Summer Garden.

Alan Bloom was responsible for introducing over 150 new plant varieties, but none more famous than the RHS Chelsea Flower Show plant of the Century, Geranium Rozanne, which forms a river through the large bed in the middle of the Summer Garden. 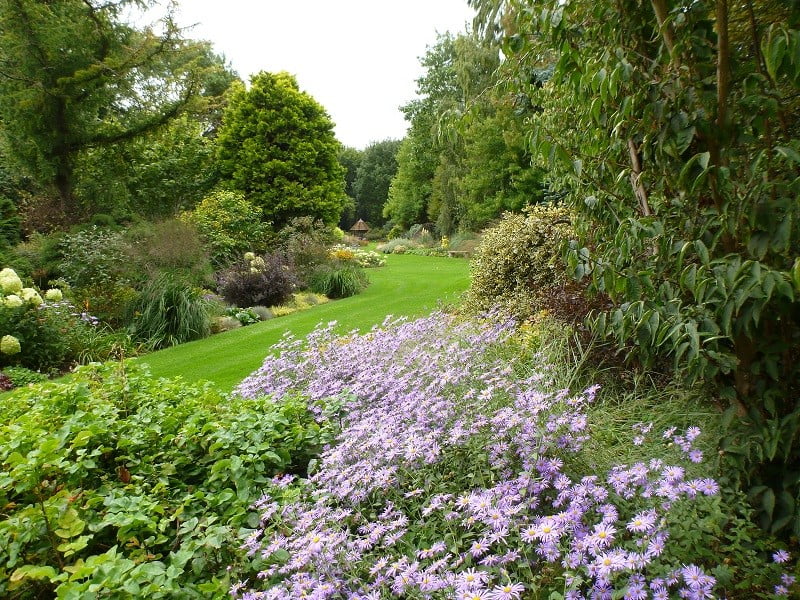 In Foggy Bottom, a river of light purple Aster leads the eye to the summer house in the far distance. 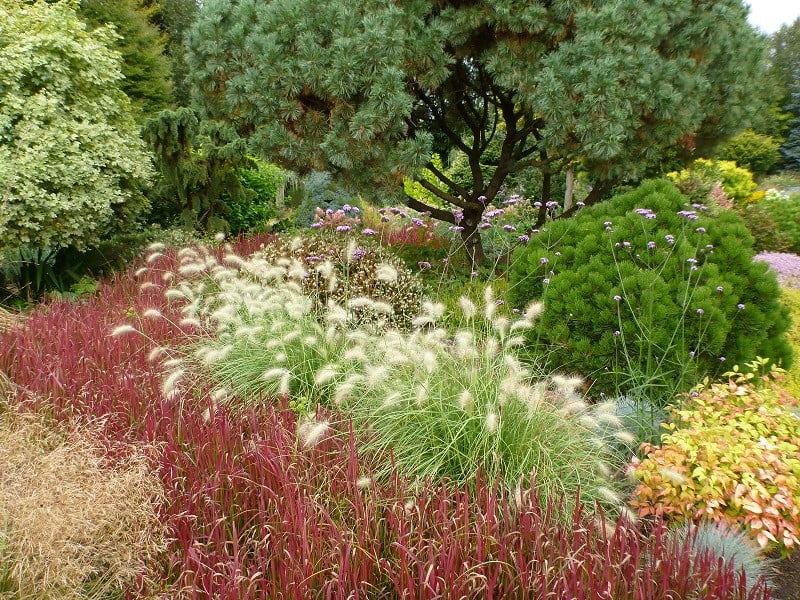 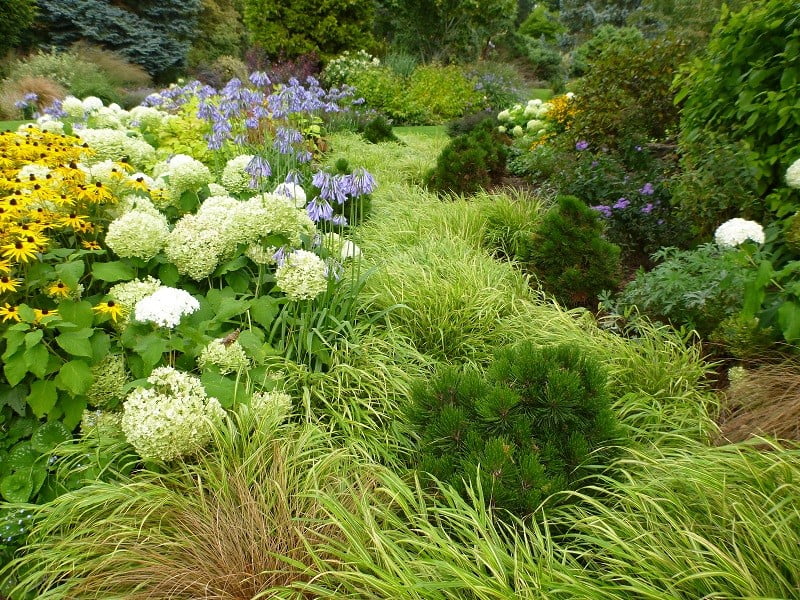 A torrent of Hakonechloa macra flows around ‘boulders’ of evergreen pine in Foggy Bottom. 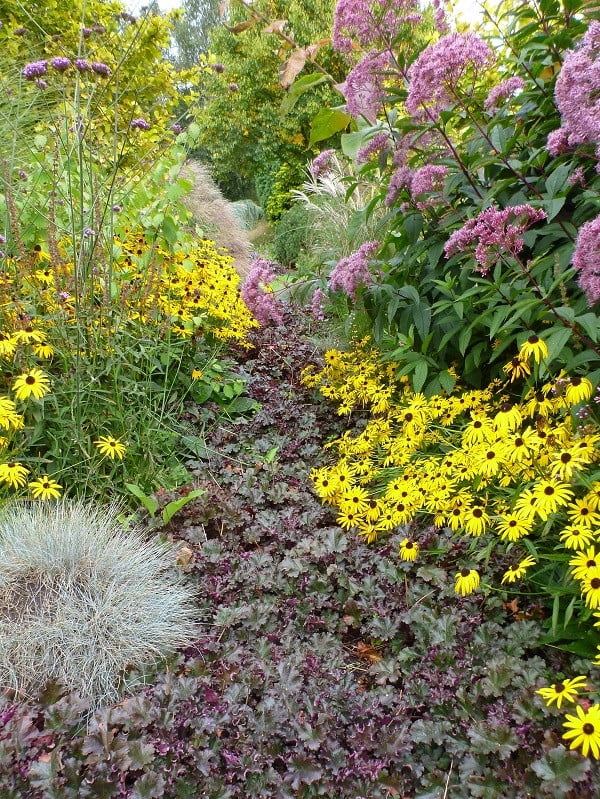 The Bressingham Gardens are truly awe-inspiring and a wonderful place to spend a few hours. Adrian has more plans to expand the gardens, and I will certainly return to watch his progress with much admiration, and perhaps just a little bit of envy.

The Bressingham Gardens, in Norfolk, United Kingdom, has extended its Autumn Opening until 12 November 2017 (the normal open season runs from March to October).