The etiquette of bush tucker foraging

It’s no longer viable to forage for bushfood. Yes, that’s a hard truth to hear, especially for us nature lovers.

But this isn’t to say we need to give up on our dreams of delicious, bountiful countryside just yet. More that Australia’s landscape has already strayed so far from that dream in the last two hundred years, we risk losing it completely if we don’t improve our relationship to our food and environment.

Along with the  rising demand for native ingredients, today’s bushfood renaissance has inspired a renewed vigour for living off the land. It’s a wonderful idea — romantic and nowhere near unrealistic in the long term — but the immediate reality has already shown concerning results. 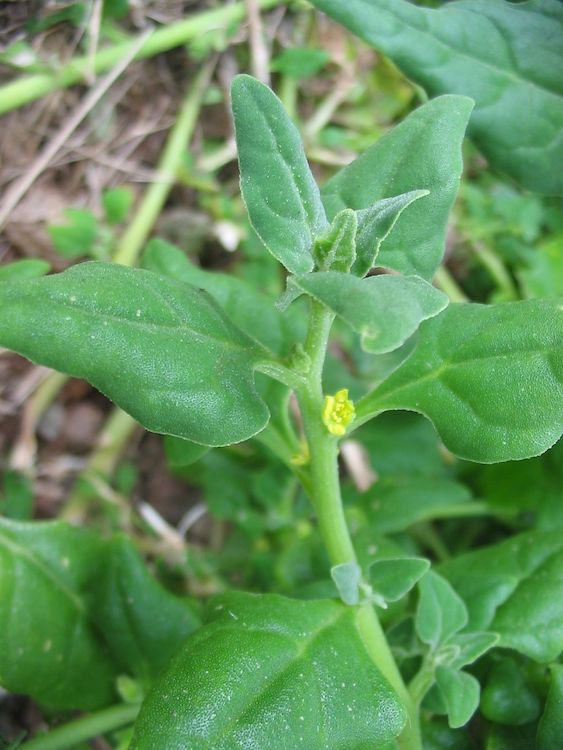 Found along New South Wales shores, warrigal greens (Tetragonia tetragonioides) has been used as a spinach substitute since the days of Early Settlement. Unfortunately, with modern pollution and industrialisation a constant threat to our environment, it’s not always safe to eat the leaves you forage in the wild.

What do we mean by forage?

This can be a hot-button topic in some circles, so let’s make the distinction clear. We’re not talking about picking from local verge gardens or private properties around your neighbourhood. As long as the owners (or occupiers) allow it, there’s nothing harmful or illegal about this type of foraging, because these spaces are regularly managed.

The danger is when we forage around shires, national parks and nature reserves — areas prone to far less attention than someone’s backyard. These are the spaces protected by law to ensure future generations, both human and wildlife, can enjoy the natural wonders we enjoy today.  https://www.facebook.com/tuckerbushplants/posts/2284491925148442

When nature can’t keep up with demand

Foraging is illegal in Australia unless you have a licence. Even public gardens with an interest in bush tucker cuisine still ban foraging on their turf unless you’re part of the wildlife.

As natural as it seems to forage while on a stroll, it just wouldn’t be sustainable if everyone did it.  And while the “ten percent” guideline is a great rule of thumb, the numbers just don’t add up. These days, the areas easily accessed by people are far too susceptible to modern population pressures.

And even with the laws in place, the impact of unlicensed, uninformed, overzealous or downright careless foraging activity have already left their mark. Like when samphire first exploded onto the gourmet scene in Western Australia, chefs would forage along the South Perth foreshore — though they worked with good intentions, their actions put a strain on the local population of this species. This, in turn, impacts the ecosystem around it in the form of salinity, erosion, wildlife food supply, and other conservational concerns. 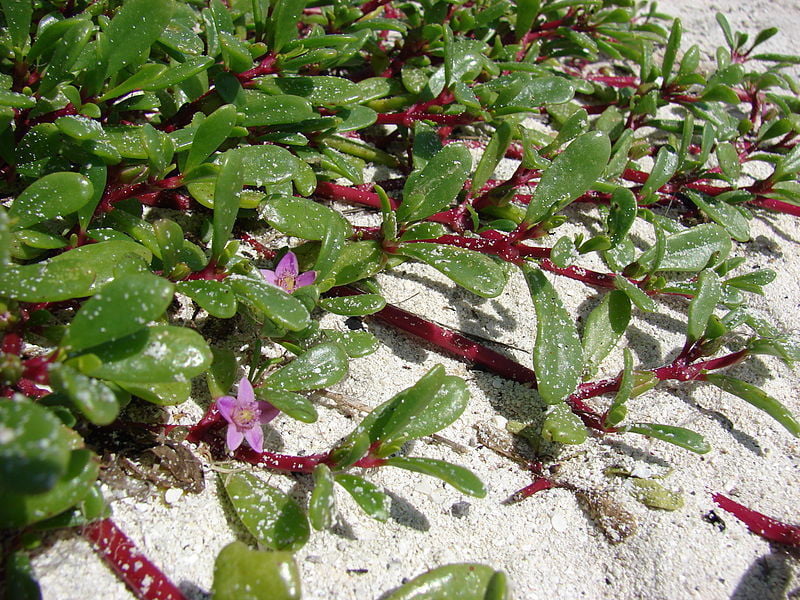 Native weeds, like sea purslane (Sesuvium portulacastrum), grow fast enough that their plant populations may not be affected by a little foraging. But do tread lightly in the surrounding area, so as not to disturb other, more sensitive plants.

But not all plants are bad to forage for. Australia is home to thousands of edible flora. Many species — like native mints, native herbs, and the plants we typically call “weeds” — grow so readily in some places that rarer species can get smothered out. As long as you’re careful, foraging for these plants, as well as non-native weeds, would do far less harm. It may even do some good.

A word on safety

Since before recorded history, what made good forage so good was that it allowed us to survive amidst a wilderness of bad forage. Collecting food from the wild can be a gamble, even if you’re an experienced forager, as many safe bush tucker plants look remarkably similar to toxic or poisonous plants — for example, gumbi gumbi (Pittosporum angustifolium), boobialla (Myoporum insulare) and blueberry lily (Dianella revoluta). 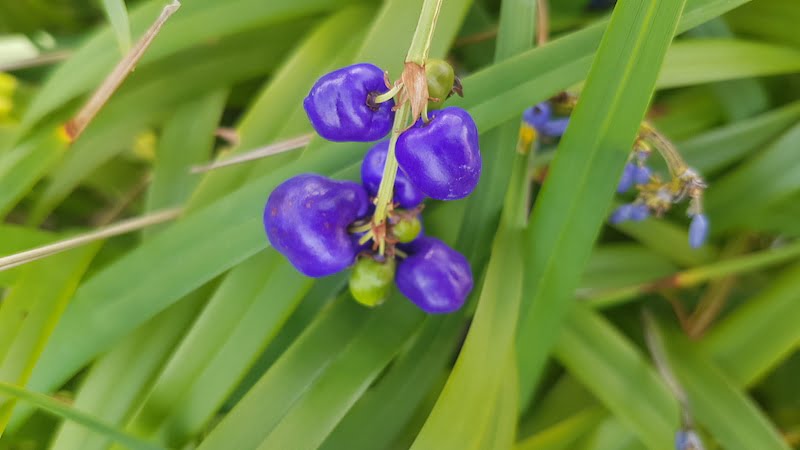 The berries of the blueberry lily (Dianella revoluta) are safe to eat, but can be easily mistaken for dianella species not recommended for human consumption. Source: Tucker Bush, used with permission.

If you’re lucky, some ‘unsafe’ plants will only make you remarkably ill. If you’re unlucky, well… at least you’d only get unlucky once.

But safe edibles and nature-friendly weeds come with their own warnings too. The spread of industrialisation means we’re surrounded by an abundance of pollution. Foraging edible weeds from roadsides is never recommended, even in the quietest and most leafy of suburbs. Besides the likelihood of ingesting pollutants from cars, pesticides and fertilisers, consider as well the possibility that passersby could have left contaminating waste or litter behind.

Perhaps the most confusing consideration of all is that safe species may not stay safe forever. For example, the zamia palm (Macrozamia riedlei) was once a staple food to the Noongar people of Western Australia. Aboriginal stories note that after being processed through traditional methods to remove the toxins, edible parts of this forage were used in the local cuisine.

These days, however, the zamia is no longer considered good forage (though exceptions may exist), as evolution has rendered the plant’s natural chemicals much stronger.

Whose forage is it anyway?

Finally, it would be impractical to ignore the element of traditional land ownership when discussing native forage. Long before the arrival of European colonists, Aboriginal people regarded themselves as caretakers of the land, with conservational habits forming a key part of their hunting, gathering and survival.

Translated to English as “connection to country”, this vital aspect of Indigenous culture recognises that both people and nature depend on each other. So, along with taking from nature, Aboriginal foraging practices come part and parcel with giving back to nature — an ingrained practice that ensures our appetite for good forage doesn’t deplete the species.

What’s more, Indigenous foraging is also informed by customs around how to effectively move through the bush, so as to minimise the damage left behind. Modern romantic tales about foraging often neglect to mention this part, resulting in many well-meaning enthusiasts unintentionally disturbing, trampling or otherwise eradicating future populations of the very species they came for. 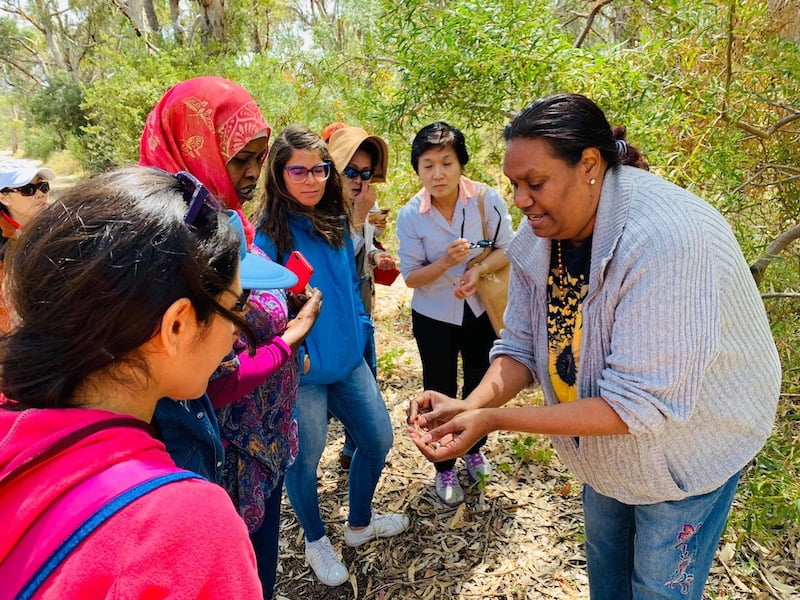 “Connection to country” is about more than just replanting trees and knowing which direction the wind comes from. It’s a philosophy centred around living in harmony with nature, informing safe and responsible food practices capable of sustaining populations for thousands of years”. Source: Bindi Bindi Dreaming, used with permission.

But far from the “ours, not yours” suspicions this kind of comparison can spark, Australia’s traditional land owners have no qualms about sharing their tradition and culture. All around the country, you’ll find Aboriginal-run guided cultural tours teaching any eager learners how to forage safely and responsibly.

The problem isn’t one of scarcity or territory, or even politics. It’s about urgently preserving tried-and-true knowledge about how to conserve nature, before it’s too late.

Grow your own. This is a garden lover’s best way to set up a household supply of native herbs, fruits and vegetables — ones that are safe and delicious to eat. Many varieties of bush tucker are easy to grow, suitable for small backyards, and can even fruit prolifically in a pot or balcony garden.

Go gourmet. Bushfoods have exploded onto the Australian fine dining scene, along with myriad ways to prepare, serve and enjoy native edibles. If low-key is more your style, you can find artisanal goods with bushtucker ingredients in many local markets.

Take a guided cultural tour. Support a local Aboriginal business — look for bushfood tours run by licensed native edible specialists. Not only will you get first-hand lessons in spotting good forage in your area, you’ll also learn how to collect responsibly, prepare safely, and ensure future generations will be able to as well.

This article is written in collaboration with Marissa Verma and Sandy Lim. 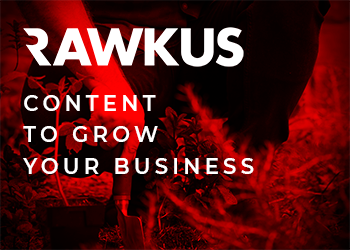